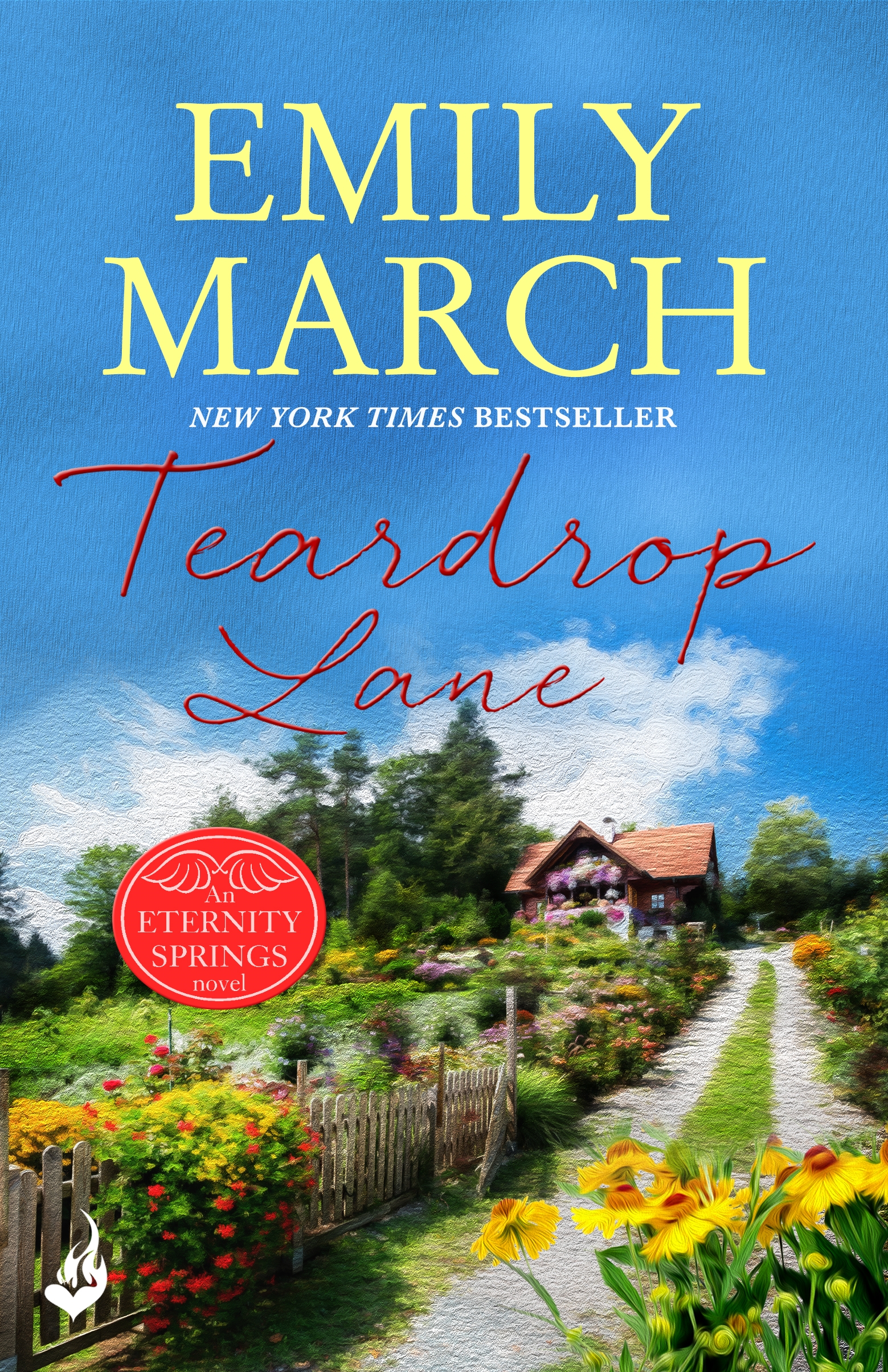 January Book of the Month

Rose Anderson removed her stethoscope from her ears and patted the silver-haired gentleman on his knee.

“It’s not my heart that’s paining me, Doctor,” he grumbled. “I told you I broke my ankle!”

“I think it’s sprained, but the EMT will be here to transport you to the clinic any moment now for an X ray. Dr. Coulson will fix you right up.”

“Dr. Coulson! What about you? You’re my doctor.”

“Then why are you wearing your white coat?”

Rose searched for patience. She wasn’t going to discuss details about her upcoming laundry day with Gilbert Henderson. “Dr. Coulson will take excellent care of you. There’s no need for concern.”

The septuagenarian scowled. “He’s not as pretty to look at as you. His bosom doesn’t brush up against me when he examines me.”

“For this we can all be grateful,” Rose deadpanned.

“You’re a prize to look at, Doctor Rose. The Irish is stamped across you. I’ve always taken a shine to redheaded, green-eyed girls. Bet you burn in the summertime if you’re not careful. How come you’re not married?”

The question could have made Rose angry, but she’d grown accustomed to it being asked. She didn’t hear it as often since moving to Eternity Springs—one of the pluses to small-town living. People ferreted out what they wanted to know about you quickly, and once they did, word got around even faster. Her friends, acquaintances, and patients knew her story by now.

Unfortunately, Mr. Henderson had a bit of dementia going on.

Ignoring the query, she said, “I know the ankle is tender now, but unless Dr. Coulson finds something on the X ray, I predict that you’ll be back to dancing in a couple of weeks.”

Her patient crooked his finger for her to bend closer, then he all but bellowed into her ear. “What about S-E-X? It is Valentine’s Day, after all.”

Yes, my personal Halloween. Rose patted his knee and told herself that she didn’t care that this senior citizen had a more active love life than she did.

“Talk to Dr. Coulson about that.”

Thankfully, the EMTs showed up and assisted Gilbert Henderson from the Angel’s Rest activities center. As Rose tucked her stethoscope back into her bag, Celeste Blessing glided up beside her. Celeste was Eternity Springs’s angel investor, the person whose idea—and whose financial stake—had created Angel’s Rest Healing Center and Spa, and spurred the economic revitalization of this little mountain town. An active and interested Judi Dench look-alike, Celeste had uncanny instincts, which she used to the benefit of those she befriended. And Celeste made friends with everybody. Rose adored her.

Celeste’s blue eyes showed a glimmer of concern as she asked, “Is Gilbert okay?”

“Gilbert is the Energizer Bunny of Eternity Springs’s seventies set, and he’ll be just fine if he stays off that ankle for a few days.”

“Good. I’d hate for anything to cast a damper on our first official Angel’s Rest Valentine’s Day Dance. It’s been wonderful so far. And just look at our honorary king and queen. Have you ever seen a more romantic pair?”

Rose followed the path of Celeste’s gaze to where Flynn Brogan and Gabi Romano swayed to Elvis singing “Can’t Help Falling in Love,” wrapped in each other’s arms, lost in each other’s gazes. “They are . . . sweet.”

“We’ve had some fabulously romantic marriage proposals here in Eternity Springs already,” Celeste continued, “but I will say I’m partial to how Flynn proposed. The way he reengineered that motorboat into an iceboat so he could take her sailing on Hummingbird Lake in order to pop the question shows not only a brilliant mind for design but also a truly romantic nature.”

Rose’s disdain melted a bit. She didn’t give a whit for romance, but a brilliant mind had always turned her on.

Of course, that was what had led her into trouble more than once, wasn’t it?

“They make a nice couple,” Rose observed, trying to show some interest in the local lovebirds. She liked Gabi. In fact, she liked all the women in her sister’s group of friends, and she considered them her friends too. But ever since she’d come to town, the single women had been dropping like flies—i.e., getting married. They were all so blissfully happy with their handsome husbands and darling kids. While they never intentionally excluded her, she was invariably the fifth wheel, the old maid, the auntie. Sometimes it simply grew old. And now, Gabriella Romano had joined the ranks. Another confederate bites the dust.

“Has Gabi said when the wedding will be?”

“I think they’re still negotiating. Gabi wants to plan a wedding—with a capital W. She does love all the froufrou and lace. Flynn, on the other hand, would like to elope.”

“I’m sure they’ll work it out,” Rose said, zipping up her physician’s bag. She lived in the garret apartment of Cavanaugh House, the Victorian mansion at the heart of the Angel’s Rest grounds. She wanted to get home to a hot bath, glass of cabernet, and the postapocalyptic novel she was reading. Exactly why she particularly enjoyed that genre of book, she couldn’t say, but she read every one that came out. She liked how the protagonists rose from the ashes, and built new worlds for themselves. Maybe because she identified with the premise. Wasn’t the life she was presently living postapocalyptic in its own way?

“I’ll be at home if you have any other accidents, Celeste,” Rose told her, thinking she might snag a brownie off the refreshment table on her way out. “Just give me a call.”

“Oh, Rose,” Celeste protested. “Won’t you stay and enjoy the dance with us? Not everyone here has a date, you know. We particularly designated it as a singles-welcome event.”

Rose’s gaze found the newly engaged couple once again, and then trailed over to where her sister danced with her husband, their expressions unfortunately sappy for a couple who should have moved beyond that dreamyeyed stage by now. “Thanks, but I need to—oh, no.”

She switched back into doctor mode the instant she spied the bloodstained boy dash into the room. She took half a step forward, then stopped and reassessed. Not blood. Food coloring? Or paint? Probably paint.

The kid was maybe seven or eight years old, and he wore red-stained jeans, a red-stained Oregon Ducks jersey, and a panicked expression. The reason for the panic became immediately obvious.

A man burst through the door in hot pursuit. Hair dark as sin flowed nearly to his shoulders and framed a face that belonged on a Hollywood movie poster advertising the latest too-handsome-to-be-human vampire flick. Dark brown eyes gleamed above sharp cheekbones and a blade of a nose. His lips drew back over straight white teeth in a tight, predatory smile.

“Get back here, you little hoodlum,” he hissed, his path taking him toward Rose. “I swear, I’m going to string you up by your shoelaces and make you listen to show tunes for two hours straight!”

The boy stopped in the middle of the hall, glanced wildly around for an escape, then darted straight for Rose. He hit her legs with enough force that she swayed and took an inadvertent step backward.

“From what?” she wondered aloud. Then, meeting the stranger’s grim gaze, she asked, “Show tunes?”

“Doctor”—his gaze lowered to the name embroidered on her lab coat, then dropped a little more and lingered on her breast—“R. Anderson. In the last two days, I’ve been stabbed with a Tinkertoy, beaten over the head with a Wii controller, drenched with fox urine, and bitten twice. So yeah, whatever nonviolent defense mechanism works.”

Then, to the boy, he added, “Keenan, stop. You are too young to feel up the pretty doctor.”

Rose’s mouth gaped, but before she could comment, the stranger continued, “Let go of her leg and come with me, you little vampire.”

“Okay.” Keenan’s face brightened, showing Rose that bribery worked with this child, too.

The hands wrapped around her legs released her, and the stranger moved like lightning to wrap his big hand around the little boy’s wrist. Keenan pulled against him, pointing toward the door. The stranger said, “Sorry for the interruption, ladies. Doctor, if you’ll send the cleaning bill for your coat to me, I’ll be glad to pay for it.”

He’d taken two steps away when Rose said, “Wait!” He pulled up. Rose focused on the boy. “The room is full of people. Why did you run to me?”

“You’re a doctor. Doctors save people.” The boy yanked from the stranger’s grasp and darted for the door.

The man met Rose’s gaze, and his lips twisted in a bitter smile. “Poor kid still believes in fairy tales.”

TEARDROP LANE is out on 27th January! 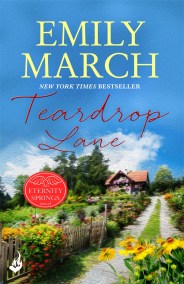 Town physician Rose Anderson hides a well of sadness behind her cheerful and capable professionalism. Heartbreak has only reinforced her belief that marriage and children aren't in her future. Yet she's a woman with a pulse - and when sexy, brooding artist Hunt Cicero shows up at her office with his young nephew, the sheer physical attraction he ignites in her is both exciting and unsettling.

Hunt has an artist's passionate temperament and a bachelor's lifestyle. So when he becomes guardian to his sister's children, he's riddled with conflict - and in way over his head. Without Rose and her warm maternal instincts, he'd be lost. Still, she's a woman who guards her own heart, and he's a novice when it comes to commitment. Can the healing magic of Eternity Springs shine on this patchwork family and allow Hunt and Rose to trust that love is the fabric holding them together?