April Book of the Month

Are you ready for Jackson Steele? Return to the enticing and explosive world of Stark, with the first in J. Kenner’s scorching Stark International trilogy, SAY MY NAME.

But I know damn well that my plea is futile, my words flat. I can’t run. I can’t hide. I can only continue as I am—hurtling at over a hundred miles per hour on a collision course with a destiny I thought I had escaped five years ago. And with the man I’d left behind.

A man I tell myself I no longer want—but can’t deny that I desperately need.

I clutch my fingers tighter around the copy of Architectural Digest in my lap. I do not need to look down to see the man on the cover. He is as vivid in my mind today as he was back then. His hair a glossy black, with just the slightest hint of copper when the sun hits it just so. His eyes so blue and deep you could drown in them.

On the magazine, he sits casually on the corner of a desk, his dark gray trousers perfectly creased. His white shirt pressed. His cuff links gleaming. Behind him, the Manhattan skyline rises, framed in a wall of glass. He exudes determination and confidence, but in my mind’s eye, I see even more.

I see sensuality and sin. Power and seduction. I see a man with his shirt collar open, his tie hanging loose. A man completely at home in his own skin, who commands a room simply by entering it.

I see the man who wanted me.

I see the man who terrified me.

I remember the way his skin felt as it brushed mine. I even remember his scent, wood and musk and a hint of something smoky.

Most of all, I remember the way his words seduced me. The way he made me feel. And now, here above the Pacific, I can’t deny the current of excitement that runs through me, simply from the prospect of seeing him again.

And that, of course, is what scares me.

As if to emphasize that thought, the helicopter banks sharply, sending my stomach lurching. I reach out to steady myself, pressing my hand against the window as I look out at the deep indigo of the Pacific below me and the jagged Los Angeles coastline receding in the distance.

“We’re on our approach, Ms. Brooks,” the pilot says a short while later, his voice crystal clear through my headphones. “Just a few more minutes.”

I don’t like air travel, and I especially don’t like helicopters. Perhaps I have an overactive imagination, but I can’t seem to shake the mental image of dozens of absolutely essential screws and wires getting wiggled loose by the persistent motion of these constantly vibrating machines.

I’ve come to accept that I can’t avoid the occasional trip by plane or helicopter. When you work as the executive assistant to one of the world’s wealthiest and most powerful men, air travel is just part of the package. But while I’ve resigned myself to that reality—and even managed to become somewhat Zen about the whole thing—I still get all twisted up during takeoff and landing. There’s something horribly unnatural about the way the earth rises up to meet you, even while you are simultaneously careening toward the ground.

Not that I can actually see any ground. As far as I can tell, we’re still entirely over water, and I am just about to point out that little fact when a slice of the island appears in my window. My island. Just seeing it makes me smile, and I draw in one breath and then another until I actually feel reasonably calm and somewhat put together.

In my mind, though, Santa Cortez island is mine. The island, the project, and all the potential that goes with it.

Santa Cortez is one of the smaller Channel Islands that run up the coast of California. Located a little behind Catalina, it was used for many years as a naval facility, along with San Clemente Island. Unlike San Clemente, which is still operated by the military and sports an army base, barracks, and various other signs of civilization, Santa Cortez lacks any development at all; it was used for hand-to-hand combat and weapons training. At least, that’s what I was told. The navy is not known for being forthright about its activities.

Several months ago, I’d noticed a small article in the Los Angeles Times discussing the military’s presence in California. The article mentioned both islands, but noted that the military was ceasing operations on Santa Cortez. There wasn’t any other information, but I’d taken the article to Stark.

“It might be up for sale, and if so, I figured we should act fast,” I’d said, handing him the article. I’d just finished briefing him on his schedule for the day, and we were moving briskly down the corridor toward a conference room where no less than twelve banking executives from three different countries waited with Charles Maynard, Stark’s attorney, for the commencement of a long-planned tax and investment strategy meeting.

“I know you’ve been looking for potential sites for a couples’ resort in the Bahamas,” I continued, “but since we haven’t yet found a suitable island, I was thinking that in the meantime, a high-end getaway location for families with easier access to the States might have real potential as a business model.”

He’d taken the paper, reading as he walked, and then stopped outside the conference room’s glass doors. I’d come to know his face during the five years I’d worked for him, but right then I hadn’t even an inkling what he was thinking.

He handed the article back to me, held up one finger in a silent demand for me to wait, and then stepped inside the room, addressing the men as he entered. “Gentlemen, I apologize, but something has come up. Charles, if you could take over the meeting?”

And then he was back in the corridor with me, not bothering to wait for Maynard’s reply or the executives’ acquiescence, but absolutely confident that things would go smoothly, and just the way he wanted them to.

“Call Nigel Galway at the Pentagon,” he’d said as we moved down the hall back toward his office. “He’s in my personal contacts. Tell him I’m looking to acquire the island. Then get in touch with Aiden. He’s gone to the Century City site to help Trent with some problem that’s come up during construction. Ask if he can get away long enough to meet us for lunch at The Ivy.”

Aiden made sense. Aiden Ward was the vice president of Stark Real Estate Development, and was currently overseeing the construction of Stark Plaza, a trio of office buildings off Santa Monica Boulevard in Century City. What I didn’t understand was why Mr. Stark would want me at the lunch, when his usual practice was to simply fill me in after the fact on any post-meeting details that I needed to track or follow up on.

“If you’re spearheading this project, it makes sense for you to be at the initial meeting.”

“Spearheading?” Honestly, my head was spinning.

“If you’re interested in real estate development, especially for commercial projects, you couldn’t ask for a better mentor than Aiden,” he said. “Of course, you’ll be pulling longer hours. I’ll still need you on my desk, but you can delegate as much as makes sense. I think Rachel would like to pick up some more hours, anyway,” he added, referring to his weekend assistant, Rachel Peters.

“Use the business plan that Trent put together for the Bahamas proposal as a model, and work up your own draft and timeline.” He glanced at his watch. “You won’t be able to finish before lunch, but you can take us through some talking points.” He met my eyes, and I saw the humor in his. “Or am I assuming too much? I thought that real estate was one of your particular interests, but if you’re not looking to shift into a managerial role—”

“No!” I practically blurt the word, my shoulders squared and my back straight. “No. I mean, yes. I mean, yes, Mr. Stark, I want to work on this project.” What I really wanted was to not hyperventilate, but I wasn’t entirely sure that was going to be possible.

“Good,” he’d said. We’d reached my desk in the reception area outside his office. “Call Nigel. Make the lunch arrangements. And we’ll go from there.”

Go from there had led in a more or less straight line directly to this moment. I’m officially the project manager for The Resort at Cortez, a Stark Vacation Property. At least I am today.

Hopefully, I’ll still be tomorrow. Because that’s the question, isn’t it? Whether the news that I received two hours ago is going to shatter the Santa Cortez project, or whether I can salvage the project along with my nascent career in real estate.

Too bad I need Jackson Steele if I’m going to pull that off.

SAY MY NAME is out now in paperback, ebook and audio! 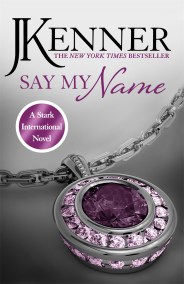 I never let anyone get too close - but he's the only man who's ever made me feel alive.

Meeting Jackson Steele was a shock to my senses. Confident and commanding, he could take charge of any room . . . or any woman. And he hungered for me. Our bond was immediate, our passion untamed. I wanted to surrender completely, but I couldn't risk him knowing the truth about my past. Yet Jackson carried secrets too, and in our desire we found our escape. Learning to trust is never easy. My mind told me to run. But heart had never felt a fire this strong - one that could save me...or scar me forever.

Return to the smoking hot Stark world with the Stark International trilogy: Say My Name, On My Knees and Under My Skin is the explosively emotional story of Jackson Steele and Sylvia Brooks.

Fall in love with J. Kenner's hot and addictive bestselling Stark series charting the romance of Nikki and Damien Stark: Release Me, Claim Me, Complete Me, Take Me, Have Me, Play My Game, Seduce Me and Unwrap Me.

Don't miss J. Kenner's explosive Most Wanted series of three enigmatic and powerful men, and the striking women who can bring them to their knees: Wanted, Heated and Ignited.