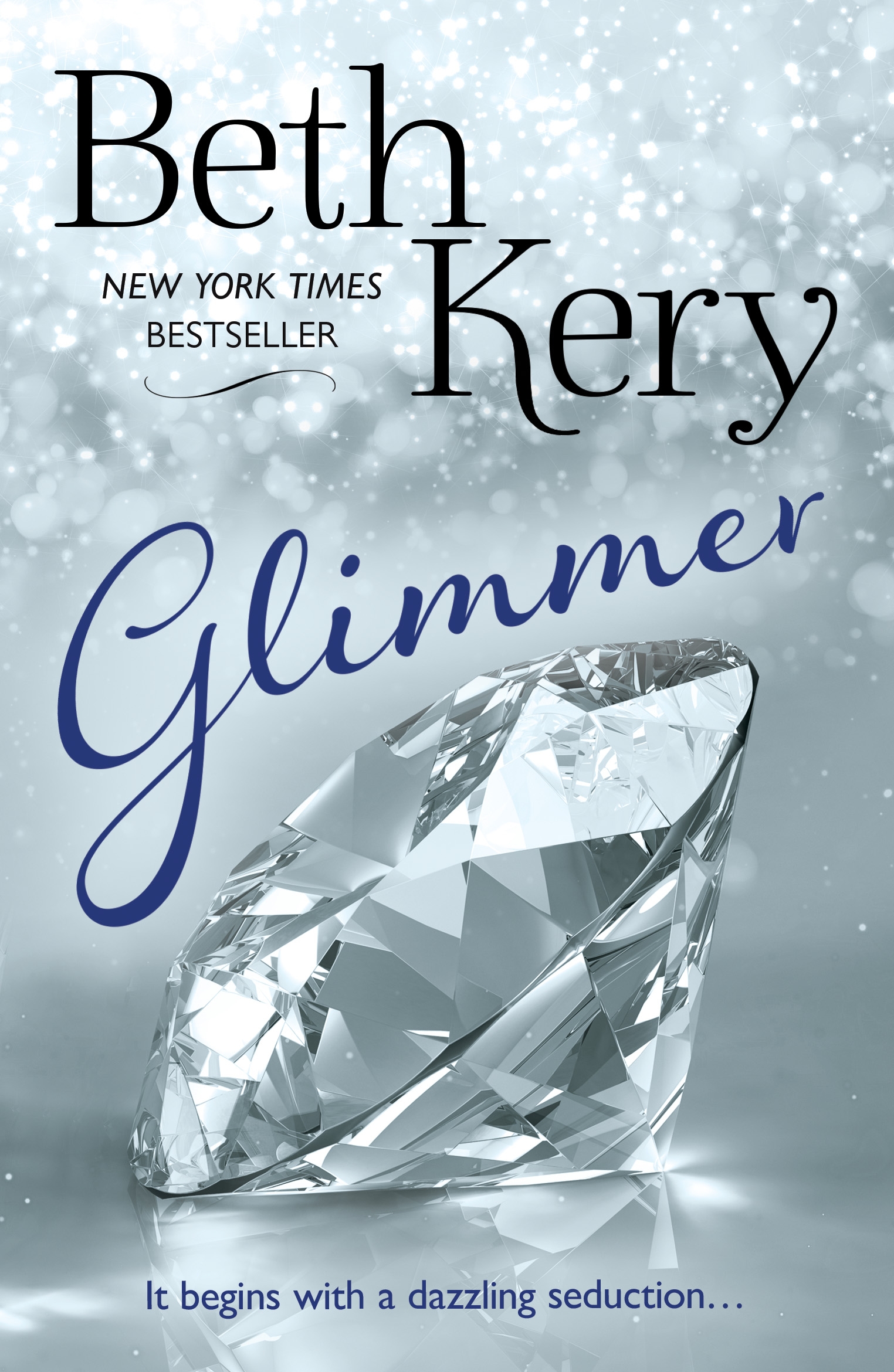 It began with a dazzling seduction … Beth Kery returns with GLIMMER, the passionate and intensely romantic story of Alice Reed and Dylan Fall.

“Don’t worry about it. It’ll be a piece of cake. Just focus on what you know. You’re pretty damn awesome when you do that,” Maggie Lopez said soothingly as she stood over Alice and gave her a friendly but critical once-over. Maggie was her graduate advisor at Arlington College’s executive MBA program. After a series of initial screwups that now looked like serendipity, Alice rented the apartment above Maggie’s garage. Most importantly, Maggie and Alice had become friends. She respected Maggie’s opinion, so her anxiety ratcheted up even higher when she saw her mentor’s slight frown as she stared down at her. A horrible thought hit her. She plopped her hand palm down on the top of her head.

“Shit. My roots. They’re showing, aren’t they? I forgot to color them. I got so caught up in running those numbers last night, I forgot about everything,” she moaned as she flung herself out of her chair and rushed to the mirror mounted on the wall in Maggie’s office. She was a decent athlete, but unaccustomed to wearing anything but combat boots, flip- flops, or tennis shoes. She nearly took a header in her new interview pumps.

Maggie sighed in amused exasperation behind her. “Only you would forget an interview for a chance at the most coveted executive training program in the United States—the world—because of some inconsequential calculations.”

Alice stared wide-eyed into the mirror. Her face looked especially pale due to her anxiety and the contrast between her short, near- black hair, navy suit, and lined dark blue eyes.

“You were the one who asked me to run those inconsequential numbers,” Alice mumbled distractedly. She flattened the hair next to her part and peered furiously into the mirror, as if she held her reflection responsible for all her many shortcomings. Sure enough, there were the tell-tale glimmering, reddish-gold roots. “Fuck it,” she muttered through her teeth. “This is a joke anyway. Durand has never sent a recruiter to Arlington College’s MBA program before. Is this another example of famous Durand charity?” she demanded, rounding on Maggie.

Maggie had grown immune to her frowns and sharp tongue in the past two years, however. She knew damn well that Alice’s bark was much worse than her bite.

“Don’t you dare put down this program,” Maggie warned with a pointed finger and an ominous expression. “I happen to be extremely proud of it and everything we’ve accomplished in the past few years, thanks in large part to your brilliance, hard work, and ground-breaking research. Am I surprised Durand asked to recruit from our graduating class? No. I’m not,” Maggie added with finality, when Alice gave her a half-hopeful, half-doubtful look. “The philanthropy and profit article sent shockwaves through the business community. Now stop feeling sorry for yourself,” she said as she dropped into her desk chair, making the springs protest loudly.

“I am proud of the P and P study,” she said honestly, referring to the ground-breaking business article she and a few other grad students had published with Maggie as the lead researcher several months ago. “Did Sebastian Kehoe tell you he was coming to Arlington because of the study?” she asked. Kehoe was the vice president of human resources for Durand.

“Then why is he?” she grumbled.

Alice halfway wished Sebastian Kehoe had continued to ignore her little college. She performed best in solitude. It grated to have to sell herself to interviewers as if she were both a commodity and the pitchman for that commodity. To say she didn’t interview well was a gargantuan understatement.

“Durand is coming because they’re searching for talented, top-notch executives, I expect.”

Alice snorted. “You told me to look at this interview as good experience for future interviews. Even you don’t actually believe anyone at Arlington stands a chance with Durand.”

“I don’t know what I think, to be honest,” Maggie said stiffly. She snapped several tissues out of a box and held them up for Alice to take. “Now wipe off some of that crap you insist on putting on your eyes. Comb your hair back from the part to hide the roots. Put on a little lipstick for once. And for God’s sake, stiffen up the spine, Reed. I expect you to rise to the challenge, not wilt in the face of it.”

Alice’s spine did stiffen in reactionary anger for a few seconds before the truth of Maggie’s words penetrated. Her mentor was right. As usual.

“I’ll go to the bathroom to wash up a bit,” Alice agreed in a subdued tone. “I have ten minutes before the interview starts.”

“Yeah?” Alice asked, looking over her shoulder. She went still when she saw the unusually somber expression on Maggie’s face.

“There’s been a little change of circumstances as far as your interview. Sebastian Kehoe became ill a few days ago and had to send someone else in his place.”

A perverse, savage combination of disappointment, triumph, and relief swept through Alice. So. They’d sent some low- level stooge in Kehoe’s place? Figured. She knew Durand would never take anyone in her graduating class as a serious contender for “Camp Durand.” The four-week-long program on the shores of Lake Michigan was where the brightest and best business school graduates went every summer to show their stuff. Sixty percent of the Camp Durand counselors were chosen to become the highest-paid, most elite young executives in the world. Through a combination of team-building exercises, intense observation, and a highly reputable children’s camp held on the lake, Durand culled the chosen few, ending up with the best of the best.

Those selected for Camp Durand were paid a hefty sum for their weeks of service, whether they went on to become permanently employed or not. Alice coveted that chunk of money, even if she didn’t dare to hope she’d ever be offered a regular corporate position at the highly successful international company. She had student loans that would come due soon, and no solid job leads. Still . . . she was torn about being forced to prove herself to the slick, influential company.

“I knew Durand couldn’t be serious about Arlington,” Alice said.

Maggie must have noticed the smirk Alice strained to hide.

“They’re so unserious about Arlington College that their chief executive officer is coming in place of Sebastian Kehoe,” Maggie said.

Alice’s hand fell from the knob of the door and thumped on her thigh.

Suddenly, Maggie seemed to be having difficulty meeting her stare. “Several Durand executives were on a business trip here in Chicago recently. When Kehoe got ill, Dylan Fall agreed to fill in for his remaining appointments.” Maggie glanced at her warily. Or was it worriedly? “I . . . I didn’t want to tell you because I thought you’d get more nervous, but I didn’t want you to walk in unprepared, either,” she said miserably.

A wave of queasiness hit her.

“Dylan Fall,” Alice stated in a flat, incredulous tone. “You’re telling me that in nine minutes, I’m going to be interviewed by the chief executive officer of Durand Enterprises?”

“That’s right.” Maggie’s expression of stark compassion faded and was replaced by her game face. “This is the opportunity of a lifetime. I don’t expect you to get a spot at Camp Durand, necessarily—that might be too much to hope for, all things considered. But you’re a unique, smart girl, and you’re kick-ass with numbers, and . . . well, you’re the best Arlington has got. You’re the best I’ve ever known,” she added with a defiant look. “At the very least, you had better walk in there, hold your head up, and do Arlington College proud.”

GLIMMER is out now in paperback and ebook! 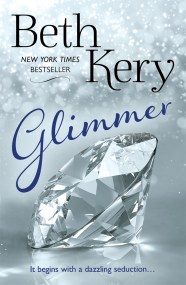 For fans of E. L. James, Sylvia Day, Jodi Ellen Malpas, J. Kenner and Maya Banks. From the New York Times bestselling author of the Because You Are Mine series and The Affair, comes a scorching novel about blazing passion from forbidden desire...

Alice Reed, an ambitious graduate from the wrong side of the tracks, is surprised and intrigued when she wins a coveted place at business school Camp Durand. The summer training camp, run by Durand's elusive CEO Dylan Fall, is legendary, and she can't help but wonder why she's been chosen. It soon becomes clear that Dylan desires Alice. And Alice is powerless to resist his fierce sexual appetite, finding ecstasy and escape in his arms night after passionate night. But behind her lover's magnetic façade and incredible sensuality, Alice senses darkness. Dylan's past is playing catch-up, his secrets waiting to be unleashed. When the long-buried truth emerges, will it tear them apart for ever?

For more electrifying romance, don't miss the other titles captivating titles by Beth Kery, The Affair, the One Night of Passion series, and her bestselling erotically charged series which began with Because You Are Mine.