She’d thought Dallas would be hers by now.

She’d thought he would understand that it was inevitable. Was it her fault that she had to hurry him along? That she had to make him see?

Where love was concerned, a girl had to do what she had to do, and Dallas Sykes was a man with a flair for the dramatic. He liked a show. He liked to make a statement.

He might be angry at first; she understood that. Because her plan to clear the path to him was—what? Radical? Dangerous?

No. Imperative. She had no choice, really. He was, quite simply, hers. The world just didn’t realize that yet.

She didn’t understand how he could not know. Between them it had been special. It had been pure. Not like those sluts he’d drawn into his bed. Not like this ridiculous affair with his sister, all the more vile because it was splashed all over social media, their shame making headlines and turning stomachs.

She’d never considered him dim-witted, but maybe he was. Because he should know. He should understand. And yet he didn’t.

But that was okay. He would soon enough.

Well, and then he’d truly be hers.

Dallas Sykes’s blood burned with dread and fear curled in his gut like acid as he stalked down the dark, residential block of Eighty-Second Street, his eyes scanning every nook and cranny, searching for a woman he knew wasn’t there.

This late, the street was deserted, the residents tucked safe in their beds behind the darkened windows of the Upper West Side townhouses that rose like the wall of an inescapable maze on either side of Dallas.

Where? Where the fuck was she?

The area was too damn dark, the few door lights far too dim to be any help at all. Instead, Dallas used the light on his phone to cut through the night as he scoured every damn inch of the street for some sign of Jane. A broken fingernail. A shoe.

He shuddered, trying to push back his terror. He wasn’t succeeding.

This was his fault, goddammit. His.

He’d hidden the truth from Jane, thinking he was making it better. That he was sparing her more pain. But those buried secrets had burst free, wild and vicious and dangerous. And now she was gone. Missing. Possibly dead—except she couldn’t be dead; the thought was too big, too horrible to even wrap his mind around.

But captive? Oh, dear Christ, what if she’d been thrust back into the horror of their childhood, and all because of him?

“Keep looking.” Liam’s voice—firm, controlled—filtered through the speaker. “I’m showing a signal.” “Of course I’m going to keep looking,” Dallas snapped. “But she’s not here.” His voice rose, matching his escalating fear. “And neither is her damn phone.”

“Stay with me, Dallas. You can’t help her if you lose your shit.”

“Fuck.” A fresh wave of fear crested inside him, and Dallas had to tighten his grip on his own phone in order to fight the almost irresistible urge to hurl the damn thing to the ground. But he couldn’t. As impotent as his smart phone was at the moment, it was his lifeline to her.

His heart. His soul.

The one person in all the world he craved, needed, loved more than any other.

And Liam was right—he couldn’t help her if he lost control. If he let himself drown in fear and memories.

So he wouldn’t. He’d stay on the street. He’d search. He’d follow every lead. But in the end, he would find her because no other option was even conceivable. He’d find her, he’d rescue her, and then he’d kill the fucking bitch who’d taken her.

Fighting a shudder, he once again looked at the image that someone had sent to him from her phone.

Jane. Unconscious and helpless on a sidewalk. This sidewalk. Or at least somewhere near here, because Liam was tracking her phone to these coordinates. So where the hell was she?

Slowly, he drew in a breath, then exhaled with just as much precision. “You’re sure this is the location?”

“I’m sure. I’m logged in to her account. I can see the phone’s location on the map. And we’re looking at a circumference of about eight meters.”

Dallas nodded, trusting his friend because he knew damn well that he couldn’t rely on himself. He wasn’t thinking straight at all. The last thing he remembered with any clarity was standing in the new apartment that he shared with Jane, a little shell-shocked after she’d laid into him about the secrets he’d been keeping. She’d stormed out, and he’d forced himself to hold back, knowing that she needed to get her anger out of her system. He’d expected her to take a walk, maybe visit her friend Brody.

He hadn’t expected that she would be attacked. Taken.

He hadn’t expected a repeat of their goddamn childhood.

And he sure as hell hadn’t anticipated that his phone would ping with a text message showing Jane splayed out on the street, her eyes closed and her face battered.

That image had been horrible enough. But what really gave him chills was the carnival-style mask on the ground next to her prone form. A mask just like the one the Woman had worn when she’d entered their cell all those years ago. Like she’d worn when she took him away from Jane. When she’d tortured him for hours—days—on end.

His stomach twisted as his mind filled with images of what she’d done to him. Only this time, it wasn’t Dallas who was the victim of the Woman’s cruel abuse, but Jane.

“The guys are on their way. They’ll start going door to door. We’ll find her,” Liam said, but Dallas could hear the fear in his voice, too.

He turned in a circle as he examined the empty street in this quiet, residential area. Jane had to be somewhere, and maybe the Woman had dragged her into one of these brownstones. Maybe someone had seen something, heard something. But the street was empty now. Noah and Tony would go door to door looking for witnesses. But that would take time.

Her attacker could have taken her anywhere. But she could also be right there, just meters away. She could be watching from a window, her hands tied, her mouth gagged, hope fading as she saw him fumbling in the dark.

Dallas took another hard look at the area he’d already scoured. No phone. He stepped off the sidewalk and into the street. Same as it had been two minutes ago. Except . . .

“The gutter,” he said to Liam even as he dropped to his hands and knees, then thrust his arm in up to the shoulder. Absurd, really. If the phone was down there, it would be well out of reach in the storm drain, ready to be washed away with the next rain. He couldn’t get to it, not without—

“I have it.” Then he spit out a curse. Because so the fuck what? The phone wasn’t the woman, and he still didn’t have Jane. And now he knew with absolute certainty that she wasn’t with her phone.

“Open her photos,” Liam ordered. “There wasn’t any location information buried in the picture you received or the text. Maybe the photo was taken in another block. Maybe they attacked her somewhere else and ditched the phone here.”

“Already on it,” Dallas said, a spring of hope bubbling as he tapped and swiped the screen to get the photo to open. Sure enough, there was location information attached. He read the GPS coordinates off to Liam, his body tense as he waited for Liam to send him to a new location.

But all Liam did was whisper a soft “Goddammit.”

Dallas didn’t need to hear more. He knew what that meant. His last line to Jane had been severed.

He cocked his head, thinking.

Maybe not the last, after all.

“Coming around,” Liam said. “We loaded him up with a shit-ton of tranqs, but they’re starting to wear off. I was about to dose him again. Keep him under until Quince can get here from London.”

SWEETEST TABOO, the sensational conclusion to J. Kenner’s S.I.N. series, is out now! 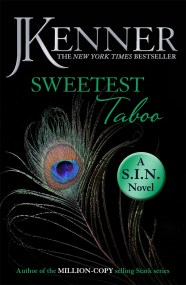 All eyes are on us...and there's nowhere to run.

Everyone has their own ideas about Dallas Sykes: he's a reckless billionaire, a devilish playboy, a man who gets whatever he wants the minute he wants it. But I know the real Dallas behind the money, bravado and power - and he's completely, blissfully mine.

We carefully guarded our secrets, and in each other's arms we sought refuge from our dark past. Our pain became our pleasure, our control within the chaos. But we could only hide from the truth for so long.

Now we've let loose our inhibitions and are ready to face the future. And no matter what people think or say, coming clean is its own sweet reward.

Find out how it all began for Damien and Nikki Stark in J. Kenner's hot and addictive bestselling Stark series: Release Me, Claim Me, Complete Me, Take Me, Have Me, Play My Game, Seduce Me, Unwrap Me and Deepest Kiss.

Return to the smoking hot Stark world with the Stark International trilogy: Say My Name, On My Knees and Under My Skin is the explosively emotional story of Jackson Steele and Sylvia Brooks.

Don't miss J. Kenner's sizzling Most Wanted series of three enigmatic and powerful men, and the striking women who can bring them to their knees: Wanted, Heated and Ignited.