The bright, speeding blaze of lightning shooting through and across the night sky illuminates the road ahead of me. The enormous boom of thunder that follows quickly on the heels of such a beautiful display makes me jump in my seat and grip the wheel tighter. Nothing but rain-soaked asphalt and darkness meet my gaze as I continue my drive. Normally, I would recognize the weather as an omen preluding my night’s plans. A warning, perhaps, but one I won’t be heeding. My mind is all over the place from my call earlier, and I just want to . . . escape, but, more importantly, I know I need a change.

“What am I doing?” I mumble into the emptiness around me.

No one answers. Of course no one does. I’m just talking to myself, like usual. Heavens me, if that’s not a sign that I’m going insane, I don’t know what is.

“That’s what happens when you spend so much time closed off.”

For the first time, the carefully constructed freedom that I’ve built for myself feels crippling. Or perhaps like it’s caving in on me, the loneliness becoming too much. I’ve never been good at being alone, something I always knew, but I never realized how bad I was at it until now. I built my new life around just that, though, so like it or not, it’s time to get over it. It could be worse, I remind myself. Shaking off the melancholy, I continue driving, knowing that when I reach my destination I’ll be with people who care about me.

“Holy cow,” I wheeze, gripping the wheel tighter when an even louder clap of thunder breaks the silence. I’ve always loved storms, but the sky’s beautiful display is only amping up my already frazzled nerves, and I feel the unfortunately familiar burn of fear creeping up my spine before I can push it down.

I pull off the deserted back road and onto the shoulder, my headlights illuminating a sign announcing that I’m now leaving the town of Wire Creek. Beyond that is Pine Oak. It’s a small town in northeast Texas, far enough from the big city for residents to be in their own little world. I grew up in Pine Oak, but after moving away just out of high school, I cut all ties and left some bad memories in my wake before returning to the area, opening up my dream bookstore, and calling Wire Creek my home.

I was close enough to feel the tug pulling me back toward Pine Oak every now and then, but far enough away that I wouldn’t likely run into people who knew the old me.

It had been my second chance at happiness when I’d needed it the most—hence the name—and is something that I’m immensely proud of, even if being this close to Pine Oak brings back some bad memories I’d rather forget.

I have—or had, rather—a few friends in Pine Oak. It’s not a stretch to think that they’re still there—no one really ever leaves Pine Oak. I haven’t seen or spoken to them in years though, so I think I’ve lost the right to call them friends. Actually, that right probably disappeared when I vanished without a word after graduation, and I’m not naive enough to think I’d be forgiven for that. But the stupid little hopeful cheerleader that pops into my mind every now and then likes to remind me that my girls from high school would welcome me back as though no time had passed, if I would just grow up and make my return to the area known. The fact that my mama’s still there—not that it matters, since we don’t speak anymore—is the driving force that has kept me at a distance, if I’m being honest. I don’t need the memory of her to become a daily reality.

Not after everything that happened.

“Get yourself together, Caroline. You’re stronger than this,” I mumble to the sign just outside my window.

I’ve become stronger than this. Logically, I know this, but still, old habits don’t ever really die, do they?

I didn’t survive the past twelve years to let fear keep me from living the life I’ve made. I promised myself that I’d take control of my life every day. It’s time to stop making up reasons to stay closed off and not begin my new path of living. Impulsiveness might be something outside of my nature, but the only way I can think of to shake another call from him is to leap off the cliff of my comfort zone and make myself live.

I don’t know why, after almost five years away, he started calling again. If it weren’t for the memories long suppressed that hearing his voice brings back, I would thank him, though. It’s because of that call that I was forced to really see my life, and what I saw, I didn’t like.

Pushing those thoughts out of my mind, I turn the wheel to get back on the road and take the long way around Pine Oak’s limits so I can get to the town on the other side—Law Bone. I could go home. I probably should, but I really don’t want to be alone right now—something my mind knew immediately during that call, because I ran out into the storm the second I’d tossed my phone across the room. So I point my car to the one place I know without a shadow of doubt will let me lose that feeling of being alone by finding safety in numbers but still remaining by myself at the same time.

Hazel’s, the local honky-tonk, is just outside of Pine Oak—on the farthest opposite end of Wire Creek, inside Law Bone city limits. Okay, to call it a honky-tonk would be a stretch. It’s a motorcycle bar that plays country music. It caters to a rough and rowdy crowd, but no one in there ever pays me a lick of mind. Of course, that’s probably because one of my best friends is the owner, but even when he isn’t there, I’m the last thing a man inside that place is looking for.

I’m shy by nature, an introverted book nerd who can handle fictional people a lot better than I can deal with real ones. I’m not a head turner. I never really gained the skills needed to make myself look anything but . . . well, plain. I tried. In high school, my best girlfriends always tried to teach me the ins and outs of being girly, but I was too interested in sticking my nose in a book and crushing on fictional cowboys to really retain any of it. I figured that, like in my books, the right man would love me for me and not for what the enhancements of makeup and fancy clothes could do.

I glance up at my reflection in the rearview as I pull into the lot and park, and fight off a cringe. I look sad, and that sadness makes me look much older than my nearly thirty years. My brown eyes don’t shine with the mirth most women my age have dancing in theirs. Those are the carefree women who still believe they’ll find a life partner to ride off into the sunset with. Just the thought makes me snort.

Where I always found my ordinary features and dull brown hair to be boring, I know the one thing I actually do have going for me is my figure. I’ve got the body of a dancer—thin and petite. It’s my greatest attribute. I might not have all the curves most men seem to love, but I’ve been blessed with a body that requires minimum work to keep trim and firm.

There isn’t anything about me that particularly screams, Hey, look at me! but I’ve been told men like my shape because it makes them feel like they were made to protect me—or so my good friend Luke always says.

“Speak of the devil,” I mumble with a smile, seeing Luke standing under the awning outside of Hazel’s front door, blowing a long stream of smoke from his mouth. The burning tip of his cigarette stands out in the darkness around him.

Luke Hazel, half of my best-friend duo, and twin brother to Lucy, is a dog, but at least he’s an honest dog. Loyal to those he loves. Protective to the max. With his harmless flirting, he’s also helped to give me back some of the confidence I lost over the years.

“Carrie,” he drawls when I step out of my car and pull my cross-body purse over my head. I roll my eyes and cringe at the nickname he knows I hate.

“Lukie Dukie,” I jest, tossing out the nickname that I know he hates, placing my hands on my hips and arching a brow at him.

Not even fazed, he kicks off the wall he’d been leaning against and walks my way. No, he struts. Because a simple walk wouldn’t be good enough for this guy. He thinks he’s God’s gift to the females of the world. I laugh softly and fall into his arms for a hug when he reaches me.

“Not a good night to be here, sweetheart.”

The explosive conclusion to Harper Sloan’s Coming Home series, COWBOY UP, is out now! 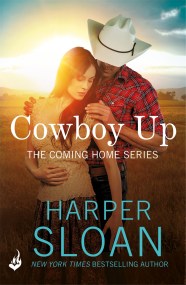 As the eldest Davis, Clayton takes his job as head of the family businesses seriously. And after a disastrous end to his last relationship, he's just fine with his quiet, solitary life. Most of the time.

Then he meets cute, quirky, shy bookstore owner, Caroline Michaels. After escaping an abusive ex, Caroline is finally living for herself - and that includes indulging in a one-night stand with Clay Davis.

But when she falls on hard times, Clay comes to her rescue, and Caroline realizes it'll be impossible to stay away from him. All she has to do is convince him to let go a little... Will Clay be able to give up the reins and finally settle down? And, more importantly, will Caroline muster enough courage to lasso him up?